Longitudal section of a steam boiler

A boiler transported onto a locomotive frame. The elements visible from outside are an outer box with a fire box nad a boiler barrel with a steam dome.

The basic elements of a boiler are an outer box with a fire box, a boiler drum and a smoke box.

An outer box with a fire box are the back part of the boiler. The fire box is located inside the outer box and consists of a tube-sheet, a shell and a door-sheet. A shell is composed of side sheets and a crown sheet. In the tube-sheet there are smoke tubes and flue tubes, running through the whole length of a boiler drum, rolled at both ends and welded to the outer sides of tube-sheets of the fire box and the boiler drum.

A boiler drum is a horizontal, cylindrical container. Numerous smoke tubes and flue tubes run along it horizontally. In the boiler drum there is water, which, heated by the tubes, transforms into steam. The pressure of the steam produced in the boiler drum increases up to the required level. From there, the steam runs through the tubes to reach a steam distributor, a compressor, an alternator, a whistle, a sandbox etc. In front of the boiler drum, there is a smoke box, where hot gases from the fire box gather.

The steaming capacity of a boiler is determined by so-called heating surface (sheets and shell of a fire box with fire and circulation tubes).

To enlarge a cab and to protect the staff against bad weather conditions, especially while driving in reverse, an additional construction at the front side of a tender may be used.

A cab is entered through the additional construction then. This solution has been applied in, among others, narrow-gauge (Px 48, Px49, SAWA, DUNA) and standard-gauge (Pm36-1 and Pm36-2) steam locomotives manufactured by Fablok.

Px48 narrow-gauge steam locomotive manufactured in Fablok, Chrzanów, with an additional construction at the front side of a tender

There are four openings in each side of a cab – front, side and back (if there is a back side) windows and a door used to exit the cab or enter a bridge. A cab has also an opening through which the coal in a tender is reached.

A locomotive frame is made of steel sheets or sections. It consists of longitudal beams called side sills,  stiffened crosswise, and of end sills. These elements are joined by riveting, welding or casting (especially in The USA).

Steam engines, axle-boxes, coupling bars and bumpers are fixed in the locomotive frame.

The elements that are also fixed to it are: braking system, compressed air containers and suspension springs, as the running gear, apart from transporting the mass, absorbs shocks.

In side sills, there are axle-box guides. They are called axle guards. Pivots of wheel sets are placed in bearings in the axle-boxes. The axle boxes move vertically in the guides, and the movement is limited by the riding of springs. 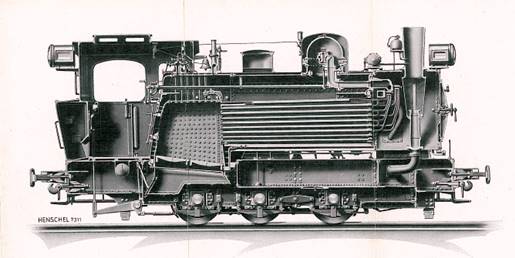 Axles together with wheels are a wheel set.

Wheel sets are divided into:

In the photograph, you can see the transport of a boiler with a locomotive frame onto wheel sets standing in front of it (not visible in the picture) on the same track, above which it is being lifted.

The position of the standing wheel sets accords to the construction plan of the particular locomotive. In the photograph, a smoke box door, a chimney, a steam dome with a regulator and a fire box are clearly visible.

In the buffer beam, seen from the front, there are elements of bumpers and opening for coupling device.

In the bottom-right, there are axle guards, having a shape of a rectangle open at the bottom. On the right and on the left, you can see the body of a steam engine with engine cylinder and a steam distributor cylinder in it.

A steam locomotive engine consists of cylinders with pistons and of a system of valves that cut off the steam flow from and to cylinders (steam distribution system). The work of the valves is regulated by a valve gear, that is, a steam distribution mechanism. A rod connects it with a cab, where the train driver regulates its position, which determines the locomotive motion direction and the engine power. The pressure of the steam that goes into a cylinder is higher than the pressure of the atmosphere and the steam is let into the cylinder through a valve at one side of the piston, whereas a valve at the other side connects the cylinder with a nozzle in a smoke box, where the pressure is the same as the one of the atmosphere. The pressure at one side of the piston is higher than at the other. This makes the piston move, with steam decompression and cooling occurring at the same time. The piston, in turn, is connected with a crank by a piston rod, at the end of which there is a joint called a crosshead. The other end of the crank is has a joint, by which it is connected eccentrically with one of motive wheels, that is, a driving wheel. This wheel, in turn, is connected eccentrically with other motive wheels by horizontal beams called side rods. Therefore, the motion of the driving wheel caused by the motion of the piston makes all the other motive wheels move simultaneously. 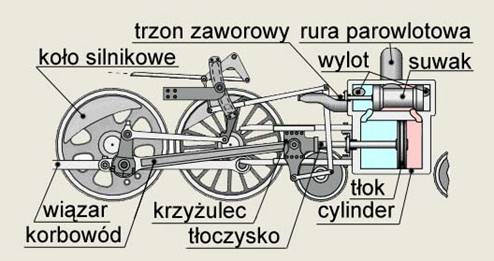 Steam engine operation – phase I
Scheme made by Paweł Piekarski, wokulski.one.pl, courtesy of the author

When the piston reaches the end of the cylinder, a valve at this side delivers the steam from the main steam pipe. A valve behind the piston lets the used steam run to a smoke box…

…and the piston moves backwards dragging a crank (with a piston rod), which drives the motive wheels.

When it reaches the other end of the cylinder…- phase III
Scheme made by Paweł Piekarski, wokulski.one.pl, courtesy of the author

…the cycle repeats.
Scheme made by Paweł Piekarski, wokulski.one.pl, courtesy of the author

The friction of moving motive wheels against rails causes the locomotive to move. The friction depends on the wheel load, which, in turn, depends on the locomotive weight layout and the number of motive wheels. The part of the locomotive total weight that is born by the motive wheels is called the adhesive weight. If the friction is too low, the wheels spin (rotate, remaining in the same place). This may be avoided temporarily by increasing the friction by sprinkling the rails with sand. This is the purpose of a sandbox, a sand container located at the top of a wheel, from where sand is passed through thin tubes, by means of its own weight or pneumatically, to the rail in front (or the back, if the locomotive drives in reverse) of a motive wheel. The sand flow is, obviously, regulated by the train driver with a rod (in case of a gravity sandbox) or a cock (in case of a pneumatic one). This method of temporary increasing the friction is used mainly when a locomotive starts moving with a heavy set or on a steep track.

With the use of a controller, it is possible to regulate both the wheels’ motion direction (backwards or forwards) and the driving force transmitted from a piston rod to a wheel through a connecting rod. Setting the valve gear by a pushrod (8) controls the motion of a link (3) and a slide, which lets the steam into a piston. In a neutral position of the controller, the slide does not move and no steam is transmitted to pistons. Starting the locomotive requires setting the controller to the maximum (full filling) in one of the directions (forwards or backwards) and a slight opening of a regulator. With the acceleration of the locomotive, the driver pushes the controller towards the neutral position (decreasing the filling) and (possibly quickly) increasing the pressure with the regulator (to avoid losses resulting from throttling the steam flow from the boiler to a cylinder) enabling more effective use of the steam decompression. On account of this, the locomotive can accelerate and does not use large quantity of steam nor, in result, the fuel necessary to produce it. At high filling level and high pressure, lack of tractive adhesion usually occurs. To increase adhesive weight, for greater towing power, various wheel layouts have been used. Initially it was only one driving axle, and with the locomotive technology development the number was growing. The largest triple locomotives had twelve driving axles. The number of steam engines has also grown from two to three, four or even more.

The engines were arranged in parallel or in series (mainly in the USA).

According to track gauge

According to type of used steam

In last decades of steam locomotive production, almost all of them were superheated ones, whereas old types of saturated steam locomotives were gradually withdrawn from use.

According to location of fuel and water resources

According to wheel load

The locomotive tractive force depends on the adhesive force, which, in turn, depends on coupled axle load.

In a locomotive, a coupled axle is a driving axle that is connected with others by coupled rods that transmit the power. Coupled axles were used in almost all steam locomotives and rarely in diesel and electric locomotives.

To increase the adhesive force, the wheel load must be increased. The wheel load is limited by condition and type of tracks, track substructure and bridges.

According to number and arrangement of axles

The gauge-changeability was obtained by using two sets of wheels, axles, coupling rods etc., one of which was attached to a locomotive, whereas the other was stored in a locomotive shed. When needed, the set was changed.

0-4-0 narrow-gauge steam locomotive with 100 horsepower. The gauge was possible to be changed from 600 into 750 mm and the fuel – from coal into wood. Manufactured for 2nd Regiment of Train Sappers in Jabłonno